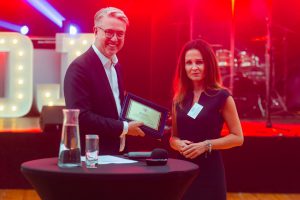 Dürr Poland Sp. z o.o. celebrated its 30th anniversary. The anniversary became an opportunity to summarize the past years and also to present the vision for the future, which assumes further dynamic development and new jobs.

The round anniversary of the corporation located on Zolkiewskiego Street in Radom admittedly falls in 2020, but at that time the anniversary celebration was prevented by a pandemic. The birthday was moved to October 14 this year. The anniversary provided an opportunity for a meeting of the company's managers, employees, friends and also the city authorities, represented by dr. Katarzyna Kalinowska, Deputy Mayor of Radom.

Dürr Poland was founded in Radom on June 5, 1990, with 10 employees. Its dynamic growth meant that in 2020 the Radom headquarters already employed 450 people, and today - nearly 600, including engineers who are graduates of the best universities in the country.

New office buildings and assembly halls were built in 1997, 2004 and 2013. In 2019, a new development was put into operation, which includes an office building and a production and warehouse hall. Work is currently underway on another Dürr development on Wrocławska Street.

The company cooperates with local high schools and the University of Technology and Humanities in the implementation of internships and educational programs (e.g., dual education) as well as in the international educational and professional development program P-TECH, launched in Poland in 2019 on the initiative of IBM. Deputy Mayor Dr. Katarzyna Kalinowska, congratulating the beautiful jubilee, mentioned that the successes that the Dürr company enjoys in global markets are also, in some part, due to Radom residents, who make up the majority of the engineering staff.

The Deputy Mayor, assuring about the opening of the city authorities to cooperation, wished the representatives of Dürr many interesting projects and successes on international markets, as well as job satisfaction and prosperity to the entire staff.

The City Hall's Office of Entrepreneurship and Investor Services, which from the beginning has supported the subsequent investments undertaken in our city by the jewelers, joins in the wishes.